Death Valley - Only for the Hardiest of Souls 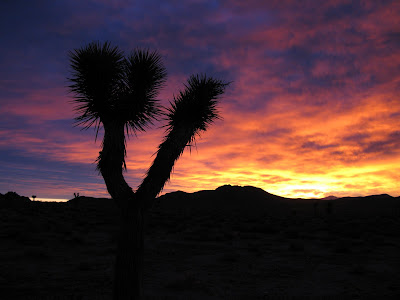 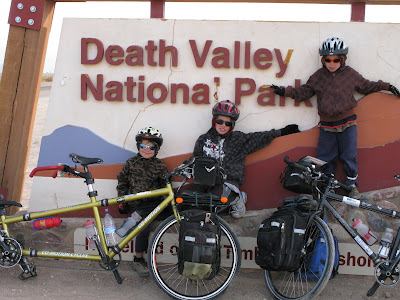 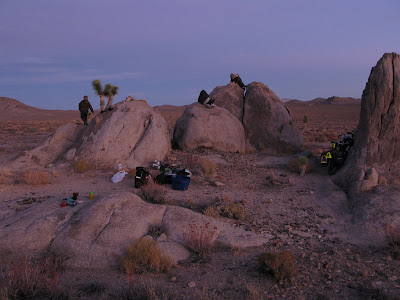 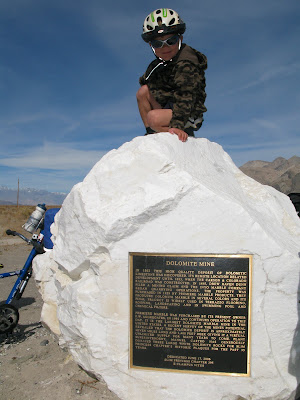 Extremes ...Lowest place in the continental USA (282 feet below sea level), hottest recorded temperatures (124 degrees F, 48 degrees Celcius), known to humble the sturdiest of souls. And location of my personal greatest bicycle challenge...two days into incredible head winds, the first with winds so strong and grade so steep (9%) that three hours of individual bike pumps paced with straining by foot up the unbikeable gusty stretches settled us into a wind blown campsite just below the guard rails and out of sight of the road. The second day held the finish of the climb, then a pedal down hill into the wind and landing at Stovepipe Springs Village within the wraps of a near white-out sandstorm. Needless to say we got a room that night - our first of the bicycle journey. Quite a come back after our down time in LA.

Markos writes Oct 27th...Yesterday we climbed up a very high pass, it was so windy we had to walk for three hours. Today we woke up and it was still windy so we did our (school) work in the tent. Tomorrow we will go to Furnace Creek and go over a pass. Oct 29, It was very windy and sandy yesterday so we got a hotel. Today we walked in the sand dunes for two hours and got lots of prickers in our bare feet. We are going out of Death Valley tomorrow.

Posted by Tanya, Rick, Sampson, Markos and Tarn at 1:59 PM No comments: 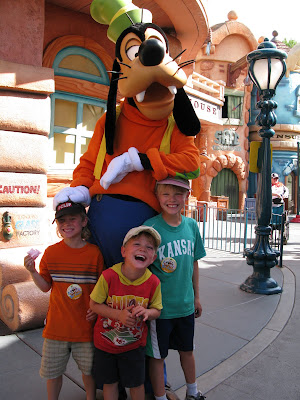 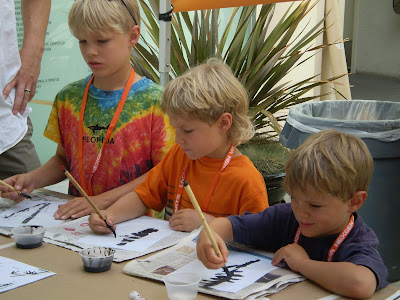 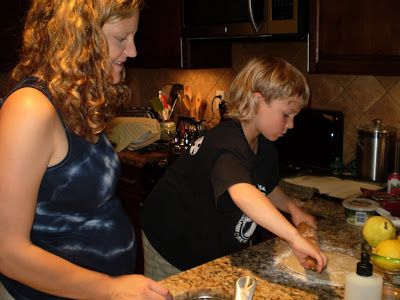 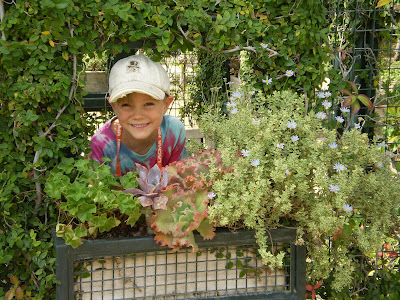 We're at the tail end of almost three weeks off the bikes. We are READY to travel by two wheels again. The fast life of the freeway is not for this family of five. However, the desire to visit family "drove" us to the alternative transportation. As Rick said yesterday when we pulled back into Bishop, "now we don't have to get back in a car for the rest of the journey".

Thank you to all for the gracious welcomes and the fun times spent with you.

Now we really are planning to get back on the bikes tomorrow. Death Valley still awaits and maps for the Baja are in our pannier library. Back to the familiar...the unknown of travel by bicycle.

Sampson writes...Huntington Gardens Today we went to Huntington Gardens. First we went to park and then went to check in. After, we were walking to the Kids' Garden and there were statues of naked old long bearded people. Then we got to the Kids' Garden. In the Kids' Garden we went through a little door and under bamboo trees. Then we got to ta part where little water spouts were spraying out forming a little dome. We stuck our hands in and it wasn't wet inside. After the Childrens' Garden we went in the big glass garden. Inside the garden were trees, plants and a pond of fish. Then we went to the "cloud forest" that was in the glass garden. In the "cloud forest" it was more of a bog and wetlands place. First we went to the side of the door and tested how much acid was in a pitcher plant. It was around 2 and 3. Then we pressed a button and little helicopter seeds went up in circles. It was telling us how they traveled in the wind.

"The Entering of Disneyland"

Today we went to Disneyland. We walked from our hotel to Disneyland and got tickets and a "First Time at Disneyland" pin. Then we went to the entrance and there were pumpkins shaped like Mickey and Donald Duck. Then we went in and went to the "Tiki Room" and heard about the gods of rain and wind and the weather. When we went in the "Tiki Room" the little parrots and toucans started singing a song, then the white parrots came in and sang a song. The birds looked like they were real but they were really puppets.

After we did the "Tiki Room" we went to the "Amazon" boat ride. First we got in line. Then we got in the boat and I was in front. Next the boat started and we were in the "Amazon Jungle" with hippos in the water and elephants in the jungle. There were also apes, one of them had a rifle and there was a flipped over tour jeep. And there were "head hunters". At the end of the boat tour little Paranas jumped out of the water. Then we got off the boat.

After the "Amazon River Tour" we went to "Tarzan's Tree House". First we went up long circle stairs on a tree trunk. At the top we went on a bridge over to another tree trunk. Then we saw a little house in the tree with "Tarzan" as a baby with a "gorilla" holding him. It said that he was raised by the gorilla and grew up to be a strong man. Then we went across another bridge and saw a table with pots and pans that were used a instruments. We banged on the pots and pans with metal bars.

After "Tarzan's Tree House" we went across a bridge and around and under the bridge into the line of "The Pirates of the Caribbean". Then we got in a dark room with lots of pirates and parrots singing. Later we got on a boat. Then the boat started and there was a pirate in a house in the water smoking a pipe. After we went down a long cave underground. Then there were skeletons with maps and brides dancing and laughing. Then we went to another room with pirates having fights with guns. The we went up and got out of the boat and walked out.

After "The Pirates of the Caribbean" we went to the "Haunted House". First we got in line for about ten minutes. Then we got in a little share seat. Then we started and there was a big dining table with a chandelier. Then there was Jack as Santa Claus laughing. Then we got out, I like that ride.

After the "Haunted House" we walked to "Splash Mountain" and got in line, (Tarn and Markos and Dad went on the Pooh Bear ride). Then we got in a "log" with seats in it. Next we went up a hill and went into the "Briar Patch" and lots of big birds were singing with Brer Bear and Brer Fox and Brer Rabbit all tied up on a stick. Then we went down and around then back up. Then we went straight down and around and got out. I really like that ride.

...As you can see, Sampson thoroughly enjoyed Disneyland. Time is limited at the moment, I will add the continuation of his documentation of the experience at a later time.


Posted by Tanya, Rick, Sampson, Markos and Tarn at 6:25 AM No comments:

A Little Downtime in Southern California 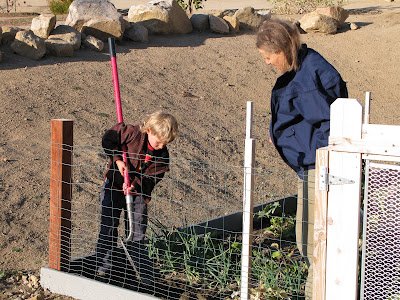 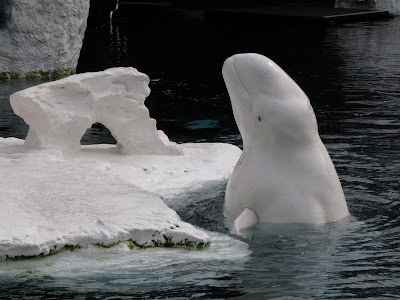 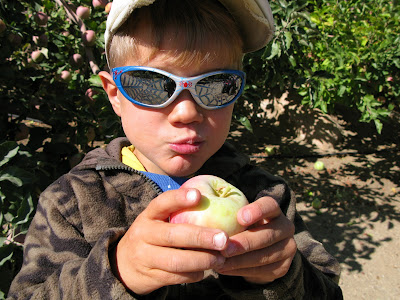 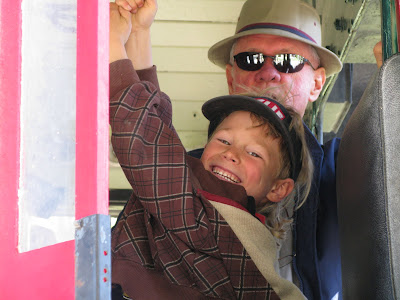 A little time off the bikes, the generous loan of Grandpa Jerry's classy car
Visits to friends and family.
TLC that we store away, for future times to drawn upon.

A time of tuning bikes
Baking treats : muffins, scones, pies and oven meals
A real down time.
When thoughts of where we'll rest our heads, or cleanse our bodies, or fill our water bottles
Are absent.

We've really had a time to let our hair down.
Ride a roller coaster
Eat burgers and bowl (the bumpers up for the kids certainly helped the adult scores!)
And...plan our next point of attack.
Death Valley to Joshua Tree

Markos' journal, October 12
At The Beach: We played with Brad's beach toys and made tunnels for water to come through. We pored the water from the bucket. It was sunny and nice today. There were lots of surfers and some were using paddles. The big waves washed in lots of kelp.

Sampson writes, October 13
Sea World: Today we went to Sea World and our friend gave us free tickets. Then we went to park and boy was the parking lot big! After that we went by the ticket posts, the tickets were seventy dollars. I'm glad we got tickets for free. Then Dad got on the phone and we looked at the map. Later we went to a sea lion exhibit and watched a sea lion story/trick. It was really funny. Then we started walking to the killer whale exhibit. On the way we saw some dolphins and sea turtles. We almost got to touch them. After the dolphins we went to the Shamu exhibit and watched a Shamu show. It was cool because the people were really strong swimmers. They stood up on Shamu's nose and fed all the orca whales fish. The whales splashed the first sixteen rows. They did back flips and jumped out of the water all the way. Later we did a ride that was really fun, we went up and down and sideways. Tarn didn't like it. After the ride we went to the Wild Arctic. It was cold but we saw a giant walrus and penguins, also some other arctic animals.

The Road to Grandma Susan's 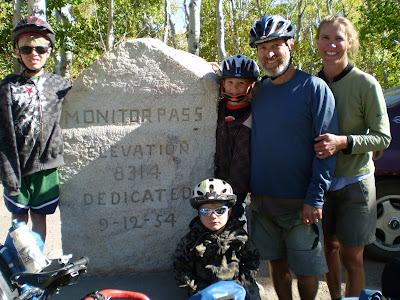 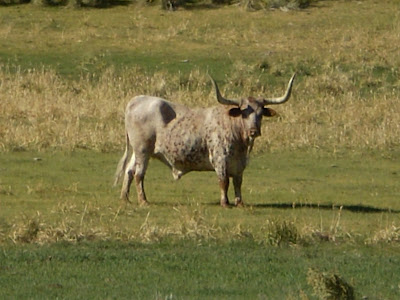 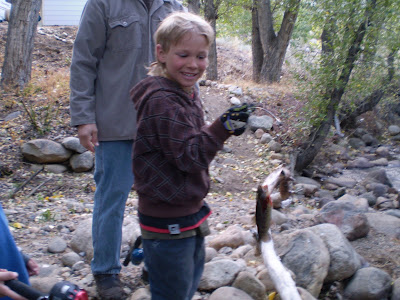 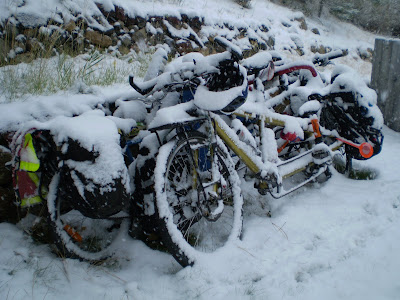 ...Don't worry, we were safe and warm inside with wonderful hosts, delicious food, and a hitch to Bishop the next day. All's well that ends well on the road to Grandmother's house.

Aunt Karen's Squash Soup (thanks Miguel for the calabaza!)