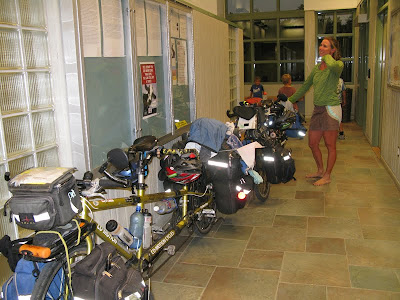 The Mosby rest area offers us shelter from a wild storm that blew up. North Dakota and Montana plains stir up some crazy systems. Thankfully we've found shelter and met some great people in the process. 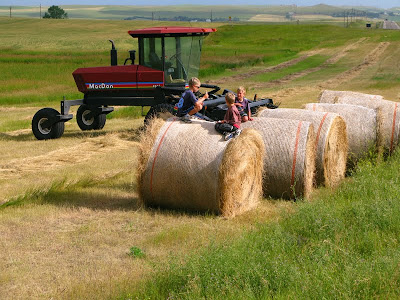 The wheat harvest means lots of combines and plenty of bales of hay. Echinachea is one of the beautiful native flowers that line the roadsides. 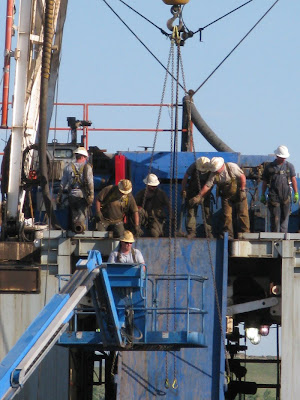 The oil boom in North Dakota is "work wonderland but not wonderful" according to Dale, the pastor's wife who offered us the shelter of their Lutheran church basement. "It's hard work and long days." On the road we've been treated considerately by the multitude of oil industry service vehicles and met many workers on our travels. 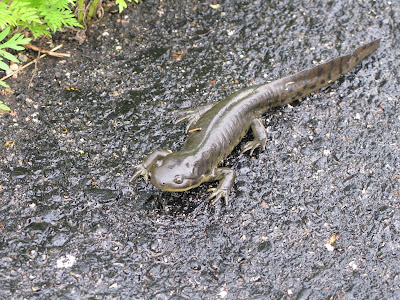 We've made friends with wandering salamanders, grasshoppers and more. Prong horn/antelope watch us from the fields and hawks from the skies. We've got a whole lot of time to take it all in - westerly headwinds have meant 8mph travel and six hour ride days between tiny wisps of towns.

Tarn's journal:
July 29 - I played with a bottle at the swimming pool.
July 31 - I just sorted out my bag.
August 1 - I weighed myself on the scale.
August 4 - The grasshoppers went nuts today.
August 5 - I found a fake grape in the park.

Sampson's journal:
August 1 - Today we went through Theodore Roosevelt National Park. We went to the visitor center to see if they had a Jr. Ranger Program and they did. The Jr. Ranger Program is a little book you get that has things you find out in the park. After that we went on a hike about a mile down the road called Buckhorn Trail. We just went through the North Unit. Dad told me there would be lots of rattlesnakes in the park so we watched out for them. The ranger recommended the trail closest to the front (of the park) because the buffalo were in the other part. The male wanted the females for themselves and wanted to protect them so they would charge at us (if we rode our bikes in that area.) I bought four post cards and a patch at the visitor center. We camped in Arnegard in the church.
August 5 - Today I woke up pretty early and then I went outside and I helped Dad make hot chocolate for breakfast. We had a really long day and we did fifty-eight miles. In the afternoon we bought some cold drinks cause it was hot. We haven't been having cold drinks for a long time. Now we are in Montana and it is getting to look like the Badlands more. There was not many towns today, only the start and end towns. I drank a lot of water today. We have been having more drink mix than normal now. Tarn found a "pet grape" today ( a little fake grape) in the park of Jordan. There is lots of yucca plant on the side of the road in the Badlands. Dad is making spaghetti dinner right now.
Posted by Tanya, Rick, Sampson, Markos and Tarn at 10:46 AM