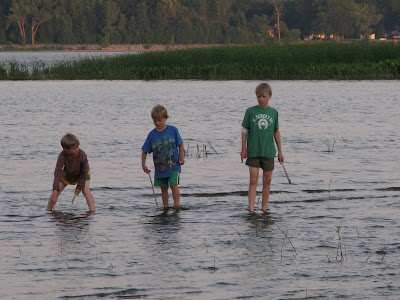 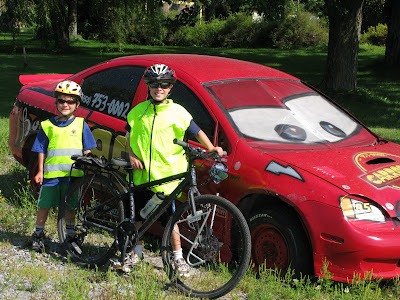 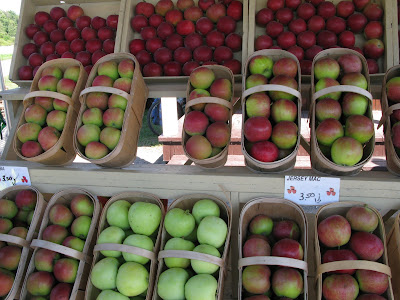 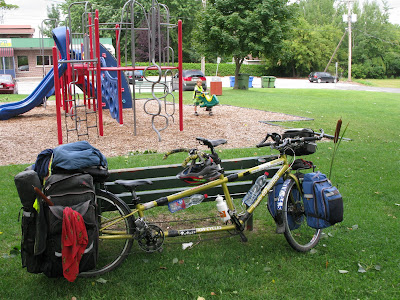 The mom and Markos outfit - Tarn takes a break at a park. Cattail in front right pannier travels with us for three-day leg to Montreal. 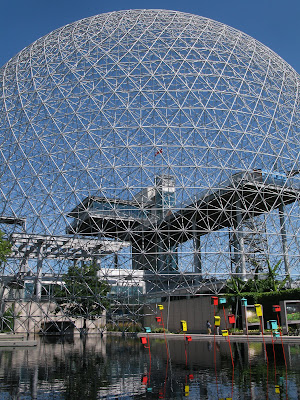 The World Expo site on Isle St. Helene, originally each triangular structure held a solid panel until a fire altered its image. 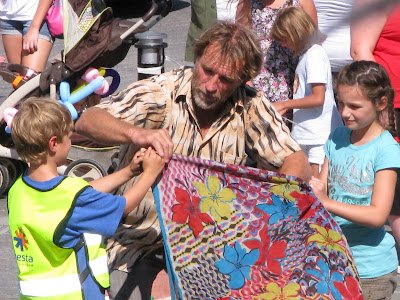 While enjoying the old town of Montreal, Tarn joins this street magician to entertain the crowd.

The ride from Sherbrooke to Montreal took us three days. Camping seemed easy enough, given a little creativity and awareness of options. Some excerpts from the boys' journals:

Tarn: Aug 14 Today was our first day on our trip. Sampson and Markos are eating plums. There is an apple tree nearby our camp. We are camping near a hotel. I like eating the plums. We are about to have dinner. There is a Santa House by our camping place. I am very hungry.

Markos: Aug. 15: We have red lentils for dinner. Today we had a very flat day because there were no hills. We asked some people to camp and they said we could camp in their back yard. I saw a bunch of bikes go by because we are next to a bike path. The fastest we went was 27 kilometres per hour and we biked for 4 hours and a half.

Tarn: Aug 16. We are camped at a cool camping place. For breakfast we had egg sandwiches. Right now we are at a library. Today we went seventy-two km. Today we got a cool kind of lemonade. The lemonade is a funny name in French "Limonade"
Posted by Tanya, Rick, Sampson, Markos and Tarn at 12:49 PM No comments: 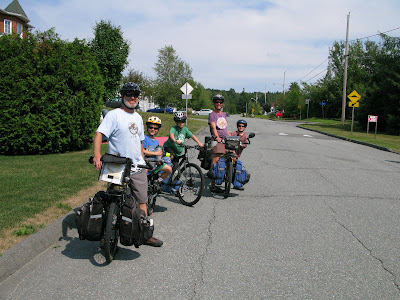 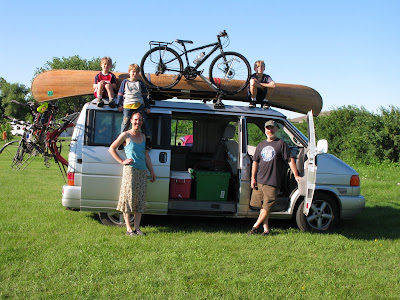 Sampson's bike on top and the tandems on the back rack.

Heading out a little different style than our 2009-2010 North American Family Bicycle Tour, this past summer we planned a two week bike tour on La Route Verte - an extensive bike route network connecting Montreal to Quebec. We loaded up our 2003 Westfalia (took a pitstop in Minnesota, USA, for a canoe trip) and landed in Sherbrooke, Quebec on August 14. We load our tandem bikes: Tarn (6yrs) rides with Rick and Sampson (10 yrs) pedals his own touring bike - a Norco rigid frame. Tanya and Markos (8 yrs) slide back into their comfortable groove, sharing a tandem and toting those humongous tandem panniers - still a necessity to carry even our bare minimum supplies. 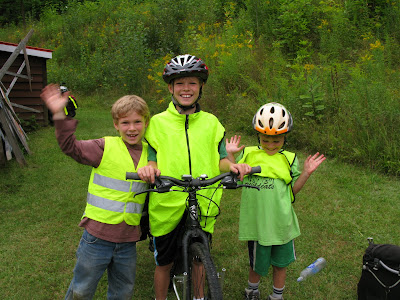 Wonder why that middle guy has such a big grin? A gift from Dad that morning, a bicycle calculator, now mounted on his front handle bars. Hmmmm, maybe not such a good idea.
"AGHHHHH!" I hear screaming from Sampson behind me. Markos and I pull off the cycle path-turned black top highway and I reel around running towards Sampson who sits gripping his knees in the scrappy grass shoulder of the road. I swipe his bike, twisted sideways, off the black top and cradle him in my arms, "It's ok, it's ok..." 34 kilometres per hour, the speed he reached before speed wobbles took him careening into the gravel - didn't think to use the breaks. Why would you if you are trying to max out your speed on your new calculator? Two hours later we're back and ride a second day of 70+ kilometres. Bike back in action, panniers removed from Sampson's bike, and Sampson re-educated about brake use. All hills will be taken in control.

Posted by Tanya, Rick, Sampson, Markos and Tarn at 12:33 PM No comments: