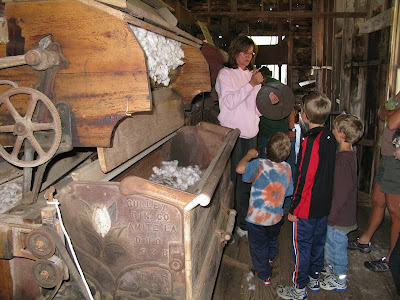 Sampson, Markos and Tarn learn how the cotton seed is separated from the lint with a cotton gin, Frogmore Plantation, LA. 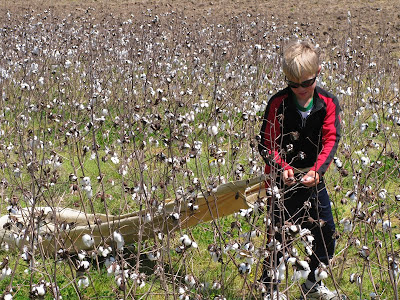 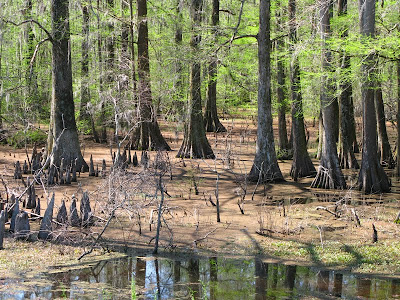 A Cypress swamp. We hear there are lots of alligators, water moccasins and snapping turtles! I think we'll be staying on the pavement! 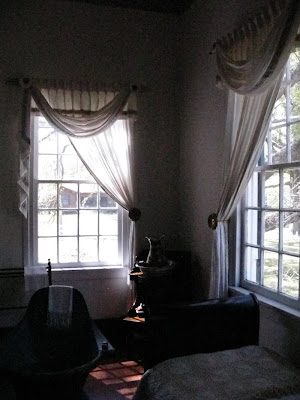 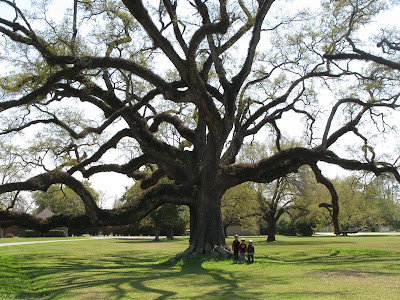 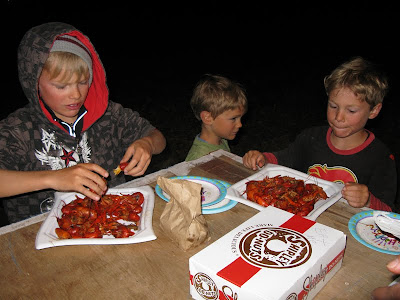 The McFerrin boys size up dinner - crawfish boiled with Cajun spices, corn on the cob and potatoes. Shipley's donuts for dessert.

The Natchez Trace is 444miles of National Park parkway connecting Natchez, Mississippi to Nashville, Tennessee. It follows the path taken by Native Americans, Kaintuck boatmen returning home to Ohio after selling their wares in Natchez and New Orleans, and Civil War soldiers, both Union and Confederate. The parkway traverses cypress swamps, hardwood forests and meadow lands. We've hit the Trace at prime Spring flowering - the white dogwood and red bud trees stand out amongst the dark greens of pines and fresh new leaves of oak and sweet gums. Roadside flowers vary in color: yellow asters, purple vinca, little red "strawberry cone" flowers, we call them, and white English daisies. The pink and red woodland azaleas are just starting to pop out.

It's time to be heading in the northward direction we are now taking - days are getting warmer, 80's and 90's Fahrenheit, 85% humidity. It's pleasant on a bike with the breeze and in the shade of trees when we stop.

Sampson's journal:
April 1 (camped behind a Baptist church) Today we woke up and I read a chapter of my Narnia book. Later Dad made grits for breakfast with pineapples and strawberries. Before breakfast we did math. After breakfast we packed up and a sheriff came by and said, "Hi". Then we left and an hour later we got to Jonesville. In Jonesville we went to Family Dollar and bought pipe cleaners (to decorate Easter Baskets) and toilet paper and coffee. The manager let us have lunch at a restaurant across the street for free. So we went there and I got some nachos for lunch. After lunch we biked to the Frogmore Plantation and learned about cotton and how it's made. The we went to Will's (parents') house. (Will is the local newspaper reporter who interviewed us that morning.) We went in their pool. They have two grandsons, Milt and Jace. Later we did journals and Dad made egg dish for dinner. Today is April 1st, (April) Fools Day.

April 2 Ferriday, LA Today I woke up and read a chapter from "The Last Battle", Narnia. Then we fed the baby calf milk. Next Dad made pancakes for breakfast. After breakfast we dug in the dirt and took down the tents, then we went and checked on the cows and said goodbye. Later we got to Ferriday and asked for water at a gas station but they didn't have any. Then we got some trail mix out for snack. Later we went across the Mississippi River and got to Natchez. In Natchez we went to the visitor center and got some maps of Mississippi. Next we went to"Fat Mama's" and got lunch. I got six tamales. After lunch we went to the Longwood House (an 1860 antebellum southern mansion) and went on a tour. Later we got to the Natchez Trace. The Natchez Trace was really beautiful. Then we went up and down to Natchez State Park and camped there. Dad made chili for dinner.
Posted by Tanya, Rick, Sampson, Markos and Tarn at 7:07 AM